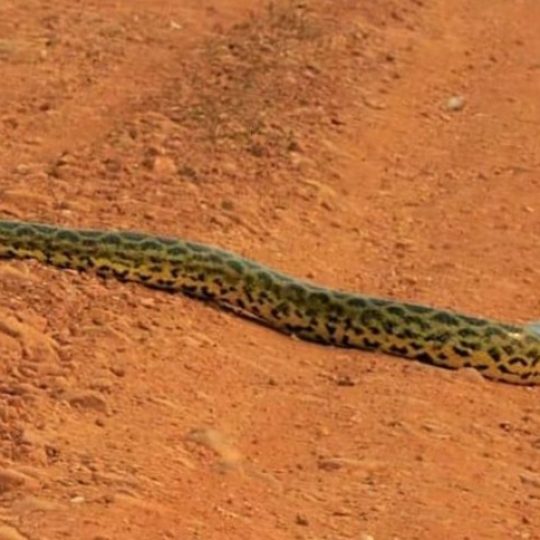 Facts about the Pantanal Anaconda.

Eventually, these are some fun facts about the Pantanal Anaconda. In fact, Eunectes notaeus, is a species of snake, originally from South America. In short, this reptile inhabits the marshes of the Pantanal . Tourists can see them not only crossing the Transpantaneira, but also in nests on the banks of the river. They are not poisonous. Therefore, they strangle their prey.

First of all, Pantanal Anaconda or Yellow Anaconda measures 60 centimeters when it is just born. However, in adulthood. It can measure up to 5 meters in length. As an adult. She weighs from 25 to 40 pounds. Females are larger than males. Second, this snake reaches sexual maturity. At 3 years old. They are serially monogamous. In the fertile period, they form a breeding ball. In other words, a group of males around a single female. The mating period is from March to May. It takes between 20 to 30 days. They are ovoviviparous. They can lay 40 to 80 eggs per clutch.

Geographic distribution of the Pantanal Anaconda.

Overall, your diet includes. Birds, eggs, fish, reptiles and small mammals. So that prey does not escape behind the boat, they have a large inwardly curved denture. They bite their prey and consequently strangle them to death. Thus, an adult anaconda eats once every five days, but this time can take up to a month. So it depends on the size of the captured prey. From the needs of each individual. And the abundance of food in their habitat.

Finally, anacondas belong to a semi-aquatic group of snakes. In fact, they are one of the largest snakes in the world. Although it is no more than 5 meters long. Contrary to what many believe, Anacondas do not attack humans. However, they can become dangerous if they feel threatened.

In Brazil. The Indians Kaxinawá tell a myth about the Pantanal Anaconda. That will. There was a man. Called Yube this. By virtue of falling in love with an anaconda woman. It turned into an anaconda as well. As a result, he went to live with her, in the rivers of the Amazon. At first, everything was going very well. but, one day, Yube, without warning his wife, decided to return to his tribe. When he came out of the water, he didn’t get his human form, instead he immediately transformed into a vine. As a result, this vine, together with the leaves of a local plant, gave the trive the recipe for a tea with healing powers. tea was used primarily in the tribe’s religious rituals. Second, the Kaxinawás. This myth explains the origin of Ayahuasca.

First of all, the Pantanal Anaconda is the reason why many visitors travel to Brazil. With that in mind, tourists arrive at Pantanal National Park , with the dream of seeing them up close. Second, on the Transpantaneira road, the possibility of seeing an anaconda is very good. In fact, in the rainy season, from December to May, the chances are even greater. The are very important for this biome. Equally important is the fact that they bring income to the local population through tourism. Foreign tourists account for about 80% of the total number of visitors. In all, millions of reais enter the country through them. In short, these animals are a great attraction and ecotourism is the best way to preserve this environment.